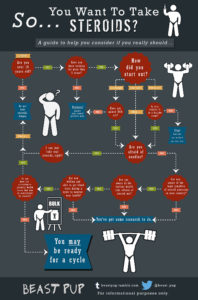 You started your test cycle and all of a sudden you’re lethargic, may have a fever, chills, body aches, even a sore throat. You wanted to kick off your training hard, but this “flu” is getting the best of you and stomping on your training. What you are feeling may not actually be a viral flu bug, but a side-effect of the rapid increase in testosterone in your body, most commonly assosciated with shorter esters like propionate or phenyl-propionate.

The most important thing to do first is rule out infection which can be caused by poor injection technique or dirty gear. The effects felt by test flu can be identical to those caused by an actual infection. To rule out infection, keep an eye out for bright red inflammation that does not fade, heat emanating from the injection site, and also, fevers, chills, body aches. If you are confident you do not have an infection, then perhaps you are suffering from the test flu.

Testosterone, once injected, will be broken down into some of all of it’s metabolites. You are likely familiar or have heard of most of them except for “Etiocholanolone”:

Simply, Etiocholanolone, is an “inhibitory neurosteroid” which means it inhibits actions on neurotransmissions. In this way, it acts as an antidepressant among other things such as:

In short, we do need etiocholanolone for optimal brain function, and subsequently, overall wellbeing. In addition to the effects above, etiocholanolone is also an immunostimulant, which means it can trigger fevers, and other immune responses which the organism afflicted associates with being sick. The reason this is more likely to occur with a short ester such as test propionate versus test enanthate is because higher amounts of testosterone are released much faster, and the body has not yet had the opportunity to adjust.

Long story short, your body just needs time to adjust. In terms how how long, the best information we have is anecdotal due to the lack of research of AAS. Typically, Bloggers and bros seem to agree on anywhere from 3 days to two weeks. In the meantime, take ibuprofen to alleviate symptoms and stay hydrated. A diet rich in anti-inflammatory antioxidants might help to. Go ahead and keep training as best you can, you are not actually sick.

Athletes partaking in the use of AAS might seem to be more likely to develop acne versus natural bodybuilders and non-athletes. Steroids contribute to increased sebum production, which contains fatty acids toxic to many benign bacteria. As a result, bacteria such as Staphylococcus aureus and Propionibacterium acnes, are able to thrive much easier due to their resistance to these fatty acids and lack of competing bacteria. This colonization leads to an immune response by the body, which causes the inflammation we know as acne.

The goal was to see how anabolic steroids affected acne caused by Propionibacterium acnes. The table below illustrates the percentage of individuals with the acne causing bacteria. 45% of steroid users’ skin contained the bacteria versus 17% of non-athletes, and surprisingly, natural bodybuilders had the least at 4%.

The types of pimples were also recorded:

Surprisingly the group studied with the clearest skin were the natural bodybuilders. One might draw the conclusion that bodybuilders, typically self-critical and health-conscious individuals exhibit healthier skin as a result of lifestyle choices. This study also supports the obvious fact that has been well known in the AAS community for a while – AAS can increase acne volume and severity.