You started your test cycle and all of a sudden you’re lethargic, may have a fever, chills, body aches, even a sore throat. You wanted to kick off your training hard, but this “flu” is getting the best of you and stomping on your training. What you are feeling may not actually be a viral flu bug, but a side-effect of the rapid increase in testosterone in your body, most commonly assosciated with shorter esters like propionate or phenyl-propionate.

The most important thing to do first is rule out infection which can be caused by poor injection technique or dirty gear. The effects felt by test flu can be identical to those caused by an actual infection. To rule out infection, keep an eye out for bright red inflammation that does not fade, heat emanating from the injection site, and also, fevers, chills, body aches. If you are confident you do not have an infection, then perhaps you are suffering from the test flu.

Testosterone, once injected, will be broken down into some of all of it’s metabolites. You are likely familiar or have heard of most of them except for “Etiocholanolone”:

Simply, Etiocholanolone, is an “inhibitory neurosteroid” which means it inhibits actions on neurotransmissions. In this way, it acts as an antidepressant among other things such as:

In short, we do need etiocholanolone for optimal brain function, and subsequently, overall wellbeing. In addition to the effects above, etiocholanolone is also an immunostimulant, which means it can trigger fevers, and other immune responses which the organism afflicted associates with being sick. The reason this is more likely to occur with a short ester such as test propionate versus test enanthate is because higher amounts of testosterone are released much faster, and the body has not yet had the opportunity to adjust.

Long story short, your body just needs time to adjust. In terms how how long, the best information we have is anecdotal due to the lack of research of AAS. Typically, Bloggers and bros seem to agree on anywhere from 3 days to two weeks. In the meantime, take ibuprofen to alleviate symptoms and stay hydrated. A diet rich in anti-inflammatory antioxidants might help to. Go ahead and keep training as best you can, you are not actually sick.

Historically and arguably in modern times, it made sense for men to be more selfish and less empathetic. Recently, studies have been done concluding a strong link between the ability to empathize, and testosterone. In this study, empathy was measured on 20 healthy female participants who were given a “single dose” of testosterone on 2 days, and tested 4 hours post administration. Because facial mimicry has been proven an accurate, and non-invasive gauge of empathy, the women’s facial expression following exposure to a sad or angry face was observed. Women administered the testosterone were significantly less likely to respond by mimicking the facial expression shown, suggesting feelings of empathy had been blunted by the testosterone.

In a similar study, it was shown that empathy was followed by a spike in oxytocin, and guess which hormone has been proven to blunt the effects of oxytocin? Testosterone. So it makes sense that men, who have more testosterone, are less empathetic than women.

Since empathy often leads to feelings of wanting to help, it makes sense for men, who are historically the providers and protectors of the tribe/clan/family etc, to have evolved a resistance to feeling empathetic. Oftentimes, feeling empathetic can lead to wanting to help someone, and helping someone can often lead to sacrificing resources, or putting ones-self in unnecessary danger. In addition, it doesn’t make sense for a man to have second-thoughts about killing an attacker or hunting prey, because a sense of empathy overwhelmed him and he changed his mind subjecting himself to danger, or the inability to provide, respectively. For women, historically the nurturers and caretakers, evolving a strong sense of empathy was paramount to ensuring that a child was not abandoned and was able to survive to one day reproduce and continue the genetic lineage.

Myostatin is a protein primarily produced in the muscles cells which inhibits the muscle growth process. As a result, a lot of research has been done central to myostatin’s role in the body in hopes of discovering a potential avenue for treating muscular dystrophy. Many athletes, once they learn about this protein, quickly seek ways to stifle it or its inhibitive properties. Capitalizing on that demand, supplement companies have eagerly begun marketing “myostatin inhibitor” products. Luckily for many of the athletes quick to jump the gun, all of those supplements have been proven benign at best, and are an absolute waste of money. There are many risks associated with inhibiting myostatin that were not as viral on the web as the muscle enhancing effects. Granted, until studies are warranted on humans, it is unclear how myostatin inhibition would affect humans (remember clenbuterol in bulls vs humans), or what the proper dosing protocol would be to mitigate the harmful effects.

That said, it is first important to discuss why this mechanism may have evolved:

If you think of your body as an economy, skeletal muscle is the luxury that you can only afford when you have enough resources (think money) to cover your basic needs. Imagine you are a fisherman, and can only work  8 months out of the 12 in a year. If you are a wise fisherman, you adapt and put money away in savings in preparation for the 4 months you will be without a steady stream of income. If you are a rookie fisherman, you use your excess income to fund your Ferrari payment, neglecting saving for the 4 months you will be without income. When fishing season is over, our experienced and well-adept fisherman can comfortably see himself through the 4 months, covering his basic needs, whereas our rookie fisherman will find himself starving to death, and his Ferrari repossessed as a result of missed payments.

Remember that primitive man did not have the ability to store or access food with the same ease that we do today. Instead, we had to evolve a self-contained storage-system: Fat. Fat is the equivalent of our wise fisherman’s savings account. Sacrificing a bit of luxurious muscle tissue for fat tissue from excess calories made survival much more likely. Ancestral men whose resources were devoted to building luxurious muscle, did not have the fat savings that prepared them for times when resources were scarce, and did not survive to pass on that genetic disadvantage, much like our rookie fisherman.

Of course in this day in age with constant access to food, this mechanism may seem vestigial, and almost like a bit of a nuisance. But as science has proven before, things in the human body are not so black and white, and myostatin’s sole function is not simply to inhibit the sweet gains of the muscle-conscious. Diving into the research, we have discovered quite a bit more about myostatin’s role in mammalian bodies.

Seen these little guys before? The subject on the right was the reason myostatin inhibition got so much attention. The mouse on the right’s ability to create myostatin was removed via gene-therapy. As a result, he was able to produce muscle tissue to the tune of roughly ~30% more mass than his wild-type counterpart. In addition to skeletal muscle mass, the mouse proportionately grew cardiac mass, and the ratio was no different to what scientists would expect to find in the mice’s wild counterparts. It seemed like the holy grail of performance enhancing drugs had been found. The study showed that in addition to the mass, grip strength significantly increased, and necessary resting time significantly decreased. This was a way to enhance muscle mass and strength without disrupting the endocrine system, and the mice seemed perfectly healthy lived seemingly normal lives. However digging deeper into the biology of the mouse told a different story. In addition, other studies have been conducted with new and different findings.

That same study also pointed out a critical flaw in the structural integrity of the muscle quality: “myostatin inhibitors have not shown any improvement on eccentric contraction-induced force drop, a key measure of myofiber structural integrity”. This finding begged the question of whether or not this was a viable treatment option for muscular dystrophy. Normally, humans can put down more weight than they can lift, a trait arguably evolved for our own safety. What this suggested for example is that, when curling, a person could lift more weight up (concentric), than that same person  could lower down (eccentric) safely. It’s cringeworthy to think of a gym where average gym goers could lift more than they can safely put down.

Another study points out the drastic reduction in stamina. Mice that were unable to produce myostatin and their “normal” counterparts were placed on the same diet and exercise routine. For four weeks, the mice ran thirty-minutes a day, five times a week. Though the myostatin-absent mice did indeed grow more muscle, they lost out in terms of stamina quite significantly. The genetically altered mice ran 28% less long, covered 40% less meters and had 38% less endurance capacity than than the natural mice. Despite this, the study did also show that the mice are indeed capable of responding normally to endurance training albeit not as efficiently.

Another study discovered that myostatin receptors exist in tendons. The scientsits compared the tendon elasticity of wild type mice, and myostatin-free mice and concluded that myostatin inhibition leads to significantly more brittle and stiff tendons. As most athletes require explosive and rapid movements, the benefits of size and strength may not outweigh the greatly increased risk of injury.

Lastly, A study conducted in Singapore aimed to discover how myostatin might play a role in the healing process. The scientists inflicted wounds on two types of mice: normal mice, and myostatin-less mice and logged healing progress over the course of about two weeks. Seen below, it became evident that myostatin-less mice healed significantly slower: 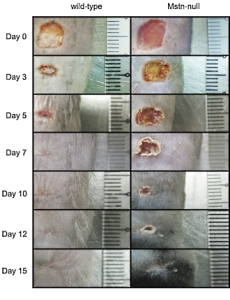 As it turns out, myostatin plays a role in healing at the dermis (skin) level and “without myostatin, new cells are produced more slowly in the dermis layer, and the cells also produce less collagen”.

At first glance, myostatin appeared to be the holy grail for athletes seeking strength, speed and size. However given recent advances in our knowledge of myostatin’s role in the body, it becomes evident that the benefits do not come without a cost: significantly less endurance, weaker and more brittle tendons, strength imbalances between eccentric and concentric movements, and a poorer affinity to heal wounds. It seems that performance athletes might want to give myostatin inhibition a second thought. Physique athletes and bodybuilders more concerned with appearance than performance, however, may welcome introducing myostatin inhibition supplementation into their regimen. Other drugs such as HGH and IGF-1 proven to increase collagen synthesis and wound healing may be a solution in combatting some of the negatives associated with myostatin inhibition.